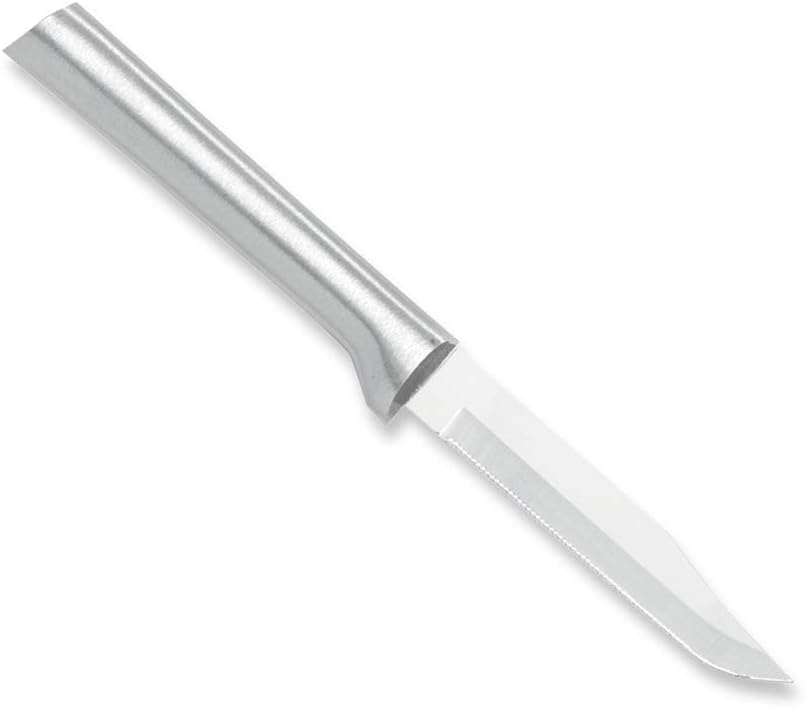 The Rada Cutlery R142 Regular Serrated Paring Knife is the alternative version of Radaâs best selling Regular Paring knife. Â This serrated paring knife will cut through the outer surface of the toughest foods. Â Youâll effortlessly slice through fibrous foods like asparagus, broccoli, carrots, onion and rhubarb. Â The blade on the paring knife measures 3-1/4 inches, has an overall length of 6-3/4 inches and is made from surgical grade, T420 high carbon stainless steel. The hollow ground blade ensures a precision concave surface for maximum edge retention. Â The super fine serrations on the blade never need sharpening. Â The handle on the serrated paring knife is made from permanently cast silver brushed aluminum with a satin finish. Â This kitchen knife should not be washed in the dishwasher. Â Handwashing is recommended. Â Rada Mfg. Co. is located in Waverly, Iowa and has been manufacturing cutlery in the USA since 1948. Â Our mission is all about âproviding our customers the best value of kitchen knives for their dollar.â Â We stand by our craftsmanship. Â Rada Mfg. Co. will replace any product manufactured by our company returned to us due to defects in material or workmanship.

Has ultra-fine serrations which allows for saw-cutting action when preparing foods.

Rada Mfg. Co. is located in Waverly, Iowa and has been manufacturing cutlery in the USA since 1948. Our mission is all about 'providing our customers the best value of kitchen knives for their dollar.'

This serrated paring knife will cut through the outer surface of the toughest foods. Youâll effortlessly slice through fibrous foods like asparagus, broccoli, carrots, onion and rhubarb.

The blade on the paring knife measures 3-1/4 inches, has an overall length of 6-3/4 inches and is made from surgical grade, T420 high carbon stainless steel. The hollow ground blade ensures a precision concave surface for maximum edge retention.