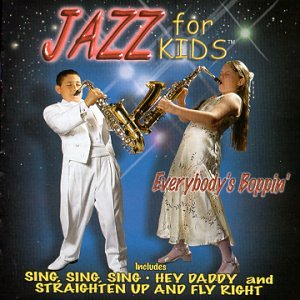 If Lisa Yves's "i"Jazz for Kids (Everybody's Boppin') flies off shelves the way it ought to, any remaining jazz-circle hubbub over whether bebop lives will finally fizzle, for now and at least a generation to come. This unfortunately unjazzily titled record--the smooth-singing Massachusetts-based music teacher's debut--mixes up a batch of classics and originals--everything from Louis Prima's "Sing Sing Sing" and Duke Ellington's "In a Mellow Tone" to her "Counting to Ten," which imaginatively and impressively teaches kids to count to 10 in 5/4 time, and "Alphabet Scat," an ABCs-based scatting primer.

But Yves, who also demonstrates her talents as producer and co-arranger here, isn't in possession of the only golden pipes on this 18-song, hourlong CD. Accompanying her on scats are a handful of students of various ages, a couple of whom step out as soloists (most notably Sarah Konowitz, whose rendition of the Neal Hefti-Stanley Styne tune "Cute" is a let's-hear-it-again gem). Sharp musicianship is especially evident on "The Dry Cleaner from Des Moines" and "Colors of the Blues," with sax, flute, bass, trumpet, and piano all handled with equal aplomb by a skilled group of studio musicians who sometimes soar, other times set a mood that's smoky, soulful, or subdued.

Best of all, though, is Jazz for Kids's effectiveness as an unstuffy introduction to this sometimes complex musical world. Yves, in her clear-headed, swingy way, flings open the genre's doors and celebrates its heroes. A few run-throughs and future scatters will come away ready to step up to the sounds of Dizzy Gillespie, Charlie Parker, Miles Davis, Ellington, and Louis Armstrong. After Yves's thoughtful, thorough introduction, they'll savor such icons all the more. --Tammy La Gorce

Roll20 uses cookies to improve your experience on our site. Cookies enable you to enjoy certain features, social sharing functionality, and tailor message and display ads to your interests on our site and others. They also help us understand how our site is being used. By continuing to use our site, you consent to our use of cookies. Update your cookie preferences here.
×
×

Play games anywhere. Share them with anyone. With Roll20® as your virtual tabletop, your adventures are limitless.

How To Get Started

Build your own from scratch, buy a ready-to-play adventure in the Roll20® Marketplace, or join someone’s game.

Share a link with your existing group or find a new party with the Join a Game feature.

Join over 8 Million players and GMs playing hundreds of systems.

And many more games

Artwork
Upload your own or choose from our Marketplace full of talented artists.
Character Sheets
Hundreds of sheets to automatically track and calculate character information, or build your own.
Programming Scripts
Automate tedious game mechanics: get hundreds of options you can add with one click.
Peak PKC0BO 400-Watt Tailgate Power Inverter

Upload your own or choose from our Marketplace full of talented artists.

Hundreds of sheets to automatically track and calculate character information, or build your own.

Automate tedious game mechanics: get hundreds of options you can add with one click.
Create Free Account

Find people to round out your party, or start with a fresh pack of players. You can even find a game starting right away. All possible because of our huge and amazing community. Once you find them, it’s easy to play and connect with built-in video and voice chat, text chat, and integrated rolling.

It's faster, better, and easier to play on Roll20®. It’s also always improving. From the best Dice Engine on the internet to immersive features like Dynamic Lighting, Roll20® will make your game nights better than you could have imagined possible.

Play on Roll20® for Free

The Roll20 team is dedicated to enabling gamers to unite across any distance via our easy-to-use gaming tools. This means we strive to lessen the technical burden on the participants, facilitate the formation of new gaming groups, and to make barriers to entry as few as possible when gathering around a table for camaraderie. To accomplish these goals we seek to create a service that is sustainable and will be a resource to the gaming community as long as it is needed.

The Roll20 Marketplace is the premiere online store for digital maps, tiles, tokens, and modules used in online tabletop gaming. Our assets are produced by independent artists and made available for the enjoyment of tabletop gamers worldwide.

If you're interested in creating new assets (tokens, maps, or modules) for sale through the Marketplace, we have all the info you need on our Become a Creator page.

Roll20® is a Registered Trademark of The Orr Group, LLC. All rights reserved.