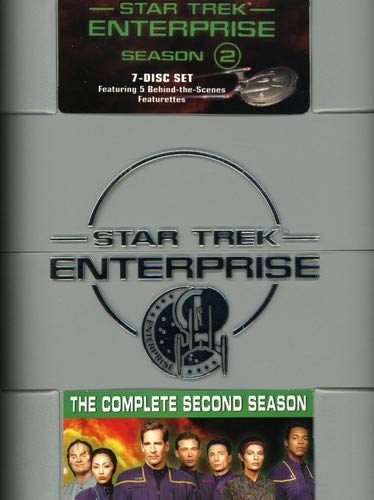 Set in the 22nd century, a hundred years before James T. Kirk helmed the famous starship of the same name, ENTERPRISE takes place in an era when interstellar travel is still in its infancy. Captain Jonathan Archer (Scott Bakula) has assembled a crew of brave explorers to chart the galaxy on a revolutionary spacecraft: Enterprise NX-01. As the first human beings to venture into deep space, these pioneers will experience the wonder and mystery of the final frontier as they seek out new life and new civilizations.

With Captain Jonathan Archer (Scott Bakula) trapped in the 31st century, season 2 of Enterprise opens with a rousing resolution to season 1's cliffhanger finale. The first four episodes instantly became fan favorites: "Shockwave, Part II" advances the Suliban's role in the Temporal Cold War; "Carbon Creek" reveals the real first contact (albeit a secret one) between humans and Vulcans in Pennsylvania in 1957, allowing Jolene Blalock to play T'Pol's "second foremother" in a Sputnik-era scenario; in "Minefield," Reed (Dominick Keating) is nearly killed by an explosive device attached to Enterprise's hull; the damage is repaired in "Dead Stop," featuring award-winning digital modeling effects as the disabled "i"Enterprise encounters a mysterious automated space station. Season 2 also emphasizes Archer's ongoing friction with the Vulcan High Command, exacerbated when T'Pol's career is threatened (in "Stigma") by her involuntary involvement with ostracized mind-melders. Connections to the original Star Trek (series and films) continue with episodes involving Tellarites, Tholians, Klingons, Andorians, and even a brief appearance by a Tribble (one of many occasions for humor in Dr. Phlox's sickbay, the setting of many of the season's finest dialogue-driven scenes). Early warp-drive history is also explored in "First Flight," a Right Stuff-like episode guest-starring Keith Carradine as Archer's friend and rival in breaking the Warp 2 barrier.

"p" Consisting primarily of stand-alone episodes that integrate ongoing story arcs, season 2 showcases the primary cast with generally good results: Mayweather (Anthony Montgomery) visits the "boomer" cargo ship he was raised on in "Horizon"; Hoshi (Linda Park) experiences unsettling transporter symptoms in "Vanishing Point"; and Tucker (Connor Trineer) plays a pivotal role in several episodes, notably "Dawn," "Precious Cargo" and "Cogenitor." And while "Regeneration" provoked controversy among fans for introducing the yet unnamed Borg in an early Starfleet context, it's a fine episode (with echoes of The Thing) that holds up to scrutiny, while others (including "The Crossing," "The Breach" and "Cogenitor") feel somewhat recycled, indicating the challenge of finding new ideas in the Star Trek canon. Overall, however, season 2 is consistently strong, with several episodes directed by cast alumni from previous Trek series, including NextGen's LeVar Burton, and "i"Voyager's Roxanne Dawson and Robert Duncan McNeill. They all lead up to a devastating attack on Earth (with seven million casualties, including Trip's younger sister) in "The Expanse," ending the season with high-stakes mystery as "i"Enterprise enters a treacherous region of space in search of the Xindi, an enemy race that factors heavily in season 3. "p" Abundant bonus features include a generous selection of deleted scenes (non-essential, but interesting to fans); audio commentary (on "Dead Stop" and "Regeneration") by writers Mike Sussman and Phyllis Strong, who explain the challenge of writing under constantly shifting production conditions; and text commentary (on "Stigma" and "First Flight"), in which "i"Trek veterans Michael and Denise Okuda demonstrate their encyclopedic knowledge of "i"Star Trek fact and fiction. Six Easter eggs, known as "NX-01 Files," are hidden on the Special Features menus; they offer brief glimpses into specific aspects of production, including set recycling and art direction. "Enterprise" secrets are revealed for those who pay meticulous attention to detail; "Inside 'A Night in Sickbay'" offers a behind-the-scenes assessment of that memorable episode; and "LeVar Burton: Star Trek Director" celebrates the actor's smooth transition to directing after his stint on "i"Next Generation. ""i"Enterprise Profile: Jolene Blalock" is a tribute to the sexy actress by her fellow cast members and executive producers Brannon Braga and Rick Berman, including Blalock's assessment of T'Pol's pivotal role as Enterprise's resident Vulcan. Best of all, however, are the hilarious outtakes: They show the cast as a family unit, combining hard work with humor as the second season progresses. "i"--Jeff Shannon

Shea Butter Benefits for Hair and 5 Recipes to Try

Shea butter is a nutrient-rich cosmetic butter that contains significant amounts of vitamins and antioxidants. The multiple benefits of shea butter for hair and its ability to address key hair issues make it a popular ingredient in both hair care products and DIY treatments. Read on to see why you need shea butter in your life, how to whip it, and what other ingredients to add in for ultimate TLC for your locks.

END_OF_DOCUMENT_TOKEN_TO_BE_REPLACED

by The Editors Updated on September 28, 2021
Trends

20 Impressive E-Girl Hairstyles to Fall For the Trending Aesthetic

Bright, high-contrast, and statement-making, e-girl hairstyles have flooded online spaces like TikTok and Instagram. Inspired by goth and anime subcultures, the trend has got a powerful boost due to the comeback of the 90s hairstyles, too. So, besides earning female bloggers and gamers some – or lots of – extra points, e-girl hair color has become a trend to be heard out loud. Keep scrolling to see some signature e-girl streaks and other ways to rock e-girl hairstyles in 2021.

END_OF_DOCUMENT_TOKEN_TO_BE_REPLACED

by The Editors Updated on September 25, 2021
Hair Advice

7 Ways to Lighten or Highlight Your Hair Naturally

Whether our hair is naturally light, or even if it’s darker brown or black, summer is often a time when our natural shade alters subtly, thanks to the sun’s rays. The results can mean anything from slightly lighter roots and tips to sun-kissed highlights. But what can we do to replicate the results without jetting off on vacation every few weeks or resorting to bleach? Read on to try some proven natural ways to lighten your hair at home. END_OF_DOCUMENT_TOKEN_TO_BE_REPLACED

40 Short Hair with Bangs Hairstyles to Try in 2021

Short hairstyles with bangs seem never to fade out or lose their actuality. Bangs transition to go along with new fads, techniques, cuts, and face shapes, and you will always see bangs on celebrities and women in the street. Color or style your short hair with bangs to highlight your best facial features. Wanna know how exactly? Let us show you some splendid ideas!

END_OF_DOCUMENT_TOKEN_TO_BE_REPLACED

by The Editors Updated on September 23, 2021
Boys and Men

A Complete Guide to All Types of Men’s Haircuts

Whether you are looking to try an entirely new haircut or just booked in with a new barber, the first step to getting a good outcome is knowing what you want and being able to convey your ideas to your stylist. Besides having some reference pictures, knowing some of the terminology and haircut names for guys will make your communication with the barber more effective. Hopefully, this guide to all types of men’s hairstyles will help you with this challenge.

END_OF_DOCUMENT_TOKEN_TO_BE_REPLACED

Should I Wash My Hair Before Dyeing It? Expert Tips

Should you wash your hair before coloring it and why would you care about whether your hair is freshly washed before a hair color appointment at all? If you have missed the debate over having your hair clean or dirty for the color service and right after it, you are at the right place to clear things up from the very beginning. Read on to know the ways you can get and keep those beautiful colors you’ve always wanted, straight from the source.

END_OF_DOCUMENT_TOKEN_TO_BE_REPLACED

Honey blonde hair tones give the perfect balance to women with blonde and brown hair seeking a subtle upgrade to their natural hair shade without going overboard or making a drastic change. Check out 30 perfect options that will inspire your next hair color!

END_OF_DOCUMENT_TOKEN_TO_BE_REPLACED

How to Cut Your Own Hair: 10 Expert Tips and Video Tutorials

Cutting your own hair often sounds like an accident waiting to happen but, with a little bit of practice, it can be easy to create stunning styles at home. Even more, women’s DIY haircuts can save you time and money, as well as give you unlimited access to new hairdos! Read on for valuable advice that will make your haircut a success. Then watch handpicked video tutorials that will teach you how to cut bangs, layer your hair, buzz cut your own hair, and even get a bob or a pixie cut at home.

END_OF_DOCUMENT_TOKEN_TO_BE_REPLACED

How to Get Rid of Brassy Hair After Bleaching

If blondes have more fun, then why is it so hard to deal with brassy blonde tones that creep into your perfect shade soon after bleaching? Too often, the icy blonde we were hoping for ends up with yellow or orange tones – a dull disappointment. If you don’t know how to get rid of brassy hair, rest assured that the tips below will help you get the cool blonde you’ve always desired.

END_OF_DOCUMENT_TOKEN_TO_BE_REPLACED

Getting a fresh look from the local barbershop isn’t going to last forever. If you want your latest haircut to look good day after day, you’ll need to learn how to maintain your hair too. Whether you have a crew cut, a bowl cut, or hair long enough to compete with Fabio, it deserves good hair care for men to keep you looking sharp. To help you on the way, we’ve pulled together a top list of hair tips for men to show how to style men’s hair the right way.